We are all born with a physical immune system. The purpose of this issue system is to bring us back to physical well-being. If I scratch my hand, I don’t have to think my way to a healed wound, it’s taken care of by my immune system. It’s a good idea to still the blood flow, and to clean it out, but besides that, not much to do. I can be a bit smart, and avoid digging in the bare soil until the wound closes over, because otherwise it might be infected, but I don’t have to order my white blood cells over to the wound site, to clean up the mess. I don’t have to send an order to enzymes and clotting factors to head on over there and get started on repairing the hole, rebuilding the skin. It is done, because that’s what the immune system does. It picks up on irregularities, and straightens them out.

I can mess it up. I can dig in bare soil, I can scratch at the wound, removing the crust, over and over again, exposing the wound to the environment and possible hazards. Worst case, I get the wound infected and it will take a long time to heal, and possibly it might need antibiotics if I’ve really messed it up. 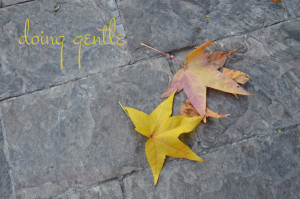 But if I clean the wound, stop the blood flow, and leave it be, letting my immune system work it’s magic, it will be fine. It’s just a scratch, and I will be fine.

Over the past couple of years, I’ve experienced nights of total insomnia. Not often, but a few times every year. And the first time, I had two nights in a row, slept one, thought I was ok, and had another one. It scared me. I got anxious, and nervous, and worried that I had suddenly developed a sleeping disorder. I started to fret about going to bed on time, and avoid screen time before bed, eating a few hours before not to have that disturb my sleep, and most of all: during the sleepless nights, I went on and on in my head, telling myself I had to sleep. I was scratching the wound, so to speak. I wouldn’t let myself rest and relax, even though I wasn’t sleeping, no, I was beating myself up over it, trying to force myself to sleep.

No such luck. But in time, after a few sleepless nights, I slept. Like a baby. Not doing anything really, except let my system work itself out.

So next time you are anxious, stressed out, feeling down, having bouts of insomnia. Leave it be. Don’t scratch on your wound. Clean it, and stop the blood flow, for sure, which in mental issues might mean things like go to bed on time, take a walk and get some air and sun, eat healthy food. But don’t go overboard, scratching at the problem. Let your immune systems take you back to your innate well-being. That’s what they are there for.