Thinking, Fast and Slow by Daniel Kahneman is not an easy read. It’s not an impossibly hard read either. But sure, it’s not a book one breezes through in a day or two, at least not me. And yet, that’s almost what I made myself do, as I had my Sunday deadline, and had only gotten about 20% of the book read earlier in the week.

Kahneman won the Nobel prize of Economics in 2002 for the discovery he writes about in Thinking, Fast and Slow, describing the two different sets of “systems” in our brains, causing us to think fast (most of the time) and slow (as little as possible, from what I gather) when (fairly) appropriate.

“‘Risk’ does not exist ‘out there’, independent of our minds and culture, waiting to be measured. Human beings have invented the concept of ‘risk’ to help them understand and cope with the dangers and uncertainties of life. Although these dangers are real, there is no such thing as ‘real risk’ or ‘objective risk’.” – Paul Slovic 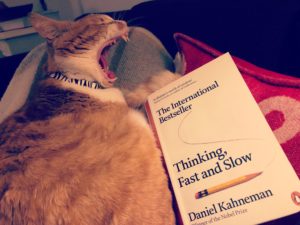 When I posted a blurb on Facebook about having 40% of reading left in this book, I got a comment from a friend stating “Haha. The book that most people never finish. Me included.” and I completely understand. I admit, that this is one of those books that I would have stopped reading was it not for my reading challenge. The first part is super-interesting, but parts of part two, three and four are a bit heavy, I have to say.

“To think clearly about the future, we need to clean up the language that we use in labeling the beliefs we had in the past.”

I had no problem finding lots of passages from the book to share, and there are plenty more where these came from. But still, unless you are really nerdy about the brain and behavior, I bet you can find a great video on You Tube explaining the concepts of Kahneman in 10-15 minutes or so. (Just did a quick search on YT. Yes. You can. Better bet than picking up a copy of the actual book.)

“Optimism is normal, but some fortunate people are more optimistic than the rest of us. If you are genetically endowed with an optimistic bias, you hardly need to be told that you are a lucky person – you already feel fortunate. An optimistic attitude is largely inherited, and it is part of a general disposition for well-being, which may also include a preference for seeing the bright side of everything. If you were allowed one wish for your child, seriously consider wishing him or her optimism. Optimists are normally cheerful and happy, and therefore popular; they are resilient in adapting to failures and hardships, their chances of clinical depression are reduced, their immune system is stronger, they take better care of their health, they feel healthier than others and are in fact likely to live longer.”

The part about optimism I find really interesting because based on the experience I have of living life as Helena, I’ve changed from being a pessimist to becoming an optimist. I even have a hard time spending time with die-hard pessimists nowadays… So I don’t know about the genetic disposition? Or perhaps, that’s just one way of being a fortunate optimist, the other is by intentionally deciding to become one?

“Some experimenters have reported that an angry face ‘pops out’ of a crowd of happy faces, but a single happy face does not stand out in an angry crowd. The brains of humans and other animals contain a mechanism that is designed to give priority to bad news.”

Given the way we (modern human beings) live our life, I dare say being aware of this negativity bias is a really good idea, also because of the focusing illusion: “Any aspect of life to which attention is directed will loom large in a global evaluation. This is the essence of the focusing illusion, which can be described in a single sentence: Nothing in life is as important as you think it is when you are thinking about it.”

Or the way I usually express it: we get more of that which we focus on. So be mindful of what you think about!

I let go of my desperation.

Not much good for anything