Tired last night after a long and intense day, I started to make my green smoothie for this morning, as I knew I would be more tired in the morning than last night before hitting the sack.

So I filled her up, my Bosch mixer… banana, apple, spinach leaves, parsley, ginger, spirulina, hemp protein powder, home grounded rose hip powder, sesame seeds, a bit of cauliflower stalk, water and whey. Pressed ON and was amazed at the difference in sound. Normally it makes quite a lot of noise, but it’s contained noise somehow. This time, I paused, turned around to look at it, and realized I’d forgotten to put on the lid. The difference in sound had to do with the fact that half-mixed bits of whatever I’d put in the container, was being sprayed onto my kitchen top and walls. 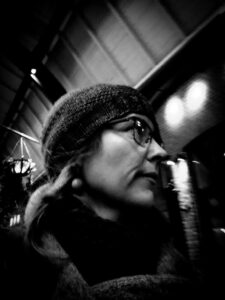 I was quick to press OFF, and then had no option but to clean up my mess.

Got it all sorted – quite gross actually, in those few seconds of mixing without a lid, the machine managed to spew out what looked a lot like barf –, and had a bottle ready in the fridge for my early departure today.

Which I remembered when I was halfway to the train station, on my bike…

Nothing to do about that, it would mess up my schedule to turn around and fetch the bottle, so I trampled on instead, and will soon send a text to my colleague whom I will be working with in the morning, asking if I can make myself some porridge or something when I get to her.

That’s me dancing with whatever knocks on my door, solving what needs to be solved, working around what can be worked around, and simply going about my day in flow. Not wasting energy beating myself up for being stupid enough for forgetting the smoothie. Not wasting energy worrying about how to solve the issue of getting some breakfast. Acknowledging what is, and moving on, knowing it’s not a big deal.

This is one way I’ve automated my responses to what-ever-happens through the help of the question How does this serve me? I no longer have to actively ask it of myself (which I’ve done thousands of times, probably tens of thousands!), it’s as if my system does that automatically, and I just pop out again, ready to dance with the next thing that knocks on my door.

From flood to ebb?

2 thoughts on “Going about my day in flow”