Like a constant hum in the background, the insistence on not wanting to ask for help. I hear it from many, most even. It’s uncomfortable, it feels scary, in part perhaps due to thoughts about belittling oneself by asking? Or is it more to do with not knowing that the answer will be favorable, and from fear of the unknown, the uncontrollable, it’s easier to simply bore down into whatever it is and try to manage by yourself, instead of putting yourself through the risk of being turned down? 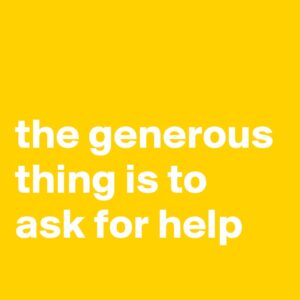 One of the interesting facts about help – almost no-one claims to like asking for help, but most everyone loves to help. So the generous thing is to ask for help, when appropriate, giving others an opportunity to step in and help.

For me, asking for help is something I’ve gotten quite good at, in large part due to the fact that since childhood I have a friend who’s a great helper, and at the same time, someone who would never say that she can help if she cannot. So I know, upon asking, that if she says Yes, it’s unequivocal, and if she says No, it’s because she cannot. Making it very easy for me to ask, as I know she takes full responsibility for answering truthfully. And when there’s a No, it’s not because she doesn’t like me, or thinks I am silly to ask, or… you know, all those dead-ends the mind has a habit of detouring into now and again.

Being gentle to me – Reflection July ’16

1 thought on “Not wanting to ask for help”