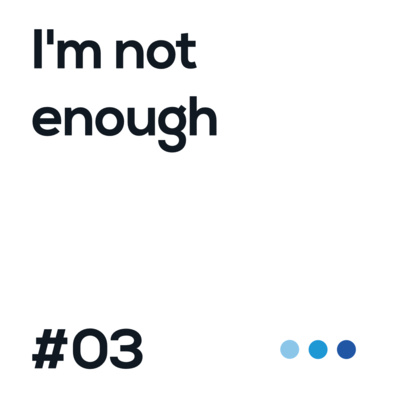 The feeling that I’m not enough. That no matter how hard I try, how hard I work, I will never be able to do enough, never able to do all that which I feel I should be doing. The frustration of not being able to make a difference, the difference I should make.

It’s not a feeling that I experience often anymore.
I used to. A lot. I had so many thoughts about what I should be doing, how I should be doing it, how fast it should be done and so on, infinitely. Know that feeling? Are you there? Or have been there?

I think a lot of us know that feeling. That’s what I perceive at least, looking at the world around me. Listening to friends and family, seeing their struggles with not being enough, never being enough. And I have to say… it really makes me question the way we’ve shaped society. Because I have a hard time to see how this serves anyone, let alone all of us collectively. I mean, you can argue that it makes people put their best effort to whatever it is they are involved in. But I honestly think it costs more than we get. The energy drained is more than what’s generated from those efforts, performed under stress, duress, unhappiness.

I, for one, know that when I stopped engaging so much with that type of thought/feeling, all of a sudden, I had so much more energy! The energy I used in beating myself up for not being enough, all of a sudden could be utilized for much more contructive things. I had energy to spare, to engage myself, to activate myself, to take better care of myself, to interact with the world around me in the way I want to show up in the world.

I am not enough.
It’s a thought. And perhaps, at times, it’s fact. That’s true. But I do believe, more often it’s an opinion. And as such, it’s worthwhile asking yourself How does this serve me? Asking that question might help you see the opinion for what it is, and realize that you have a choice in whether or not to engage in it, or not. Where’s your energy best spent, I ask? Beating yourself up for not being enough, or for more constructive things?