The bottom line: Give yourself the gift of rereading books, immersing yourself in them. Dive deep into beauty of language, complex characters, a story that makes you read ”just one more page” before turning off the lights at night.

Eight out of the nine books I read in January of 2021 were books I had previously read, one book even twice before.

What on earth for, you might well be asking, with a confused look upon your face. (Or not.) 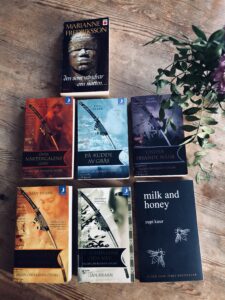 challenged
The tipping point was a challenge Caspian threw at me in the fall, one I did not go for, in totality, as the ask was to  o n l y  reread (and relisten) to books and podcasts I’d already read/listened to before. Having gotten into the habit again of buying books, especially those I know from the get-go I will be scribbling in the margins in, there are too many unread books in my bookshelf to say Aye to that challenge.

But it did strike a cord (regarding books. Mostly.).
For sure.

So I’ve been making a mental list of books I would like to reread. Books that I remember. Books that stick out, whether it be for the great story, or the great penmanship, or the great reading experience it gave me. Or perhaps a combination. So when January came around, I knew I wanted to reread books, without having specified precisely what that would mean for me.

greenlights
Surprising myself, I started with a relisten to greenlights, Matthew McConaughey’s audiobook, that I listened to first time round in the fall. I very much enjoyed the listen first time around, and the second time opened up for a more complex experience. Kind of like when you sit down to eat. If ravenous, you stuff food into your mouth, chomp down once or twice, and then swallow with a gulp, with a sense of desperation to it. After a while, the desperations leaves and in its place possibility takes its seat at the table. The possibility to truly taste what the food tastes like, to smell it, to notice texture and temperature, how difference spices and flavors marry, or shake things up. A more complex palate, a fuller picture of what’s there.

That’s what my second listen to greenlights felt like, and is one of the reasons for me wanting to reread books. But not the only one. I also look forward to being able to experience rereading a book that I read years ago, when I was different, and bearing witness to the shift in me, by witnessing the difference in reading experience.

the gamble of a reread
I’ve tried that one before, especially noteworthy my reread of a fine balance, by Rohinton Mistry, a few years back, as my reading choice for my book club. This book is one I’ve touted as the best book I’ve ever read ever since I read it mid-nineties. Rereading it was a bit of a gamble, and one I was quite conscious too, also on account of forcing my bookclub-compadres to read it as it’s a hefty book, a brick of a book, even. Having reread it, I no longer say it’s the best book I’ve ever read. And in no way was I as enamored with it, as hooked by it, as I was back when I read it for the first time (a 22-hour reading spree, reading it in one go). But it was informative, to reread it, to notice what no longer hooked me, as a 45+ woman, in comparison to the 20+ younger version of me that read it the first time.

den som vandrar om natten…
Den som vandrar om natten… was the second book to be reread (for the third time even!) this year. A book by Swedish author Marianne Fredriksson, a book that, unfortunately, I cannot find translated to English. The title, translating it myself, would be something like The one who wanders at night… and is a stunning story of human relationships, set in Athens, Rome and Jerusalem, around the time of Jesus. I’d attempted to read books by this author in my teens, recommended by friends, but never managed to get into them. So when my friend put this book in my hands in 2016 I went Nah, I don’t like her writing, he said Yes. You will. Read it, I promise it’s a book you will enjoy. I read it, loved it, and was drawn to reread it already in 2017. As I’d finished greenlights I looked in my bookshelf, pulling out books I own that I want to reread, my eyes rested upon den som vandrar om natten and I knew this one would be next on the list. And I was not disappointed. This is a book that reveals more and more to me, with every reread. Revealing more of the book, yes, most definitely, but also revealing more to me about me.

tales of the Otori
Once I was finished with that one, I started in on the trilogy of Tales of the Otori by Lian Hearn, followed by the sequel and then the prequel. Three of the books are translated into Swedish by Anders Bellis which is something I took notice of, as I’ve only in the past years truly gotten to see, feel and understand the importance of a great translator. And Bellis does such a great job of it, it’s a delight to read these books in Swedish, even though if I reread the series again, I will do so in English. First time I read them, I read a few of the books in English and some in Swedish, so I know swapping languages doesn’t pose a problem in this series (as opposed to the Harry Potter series, where the made-up words of the magic world makes it harder to switch back and forth between languages).

But oh, what beautiful books these are. The language is gorgeous, and the story well-told and enticing, not to mention the drop-dead gorgeous covers! I read the entire series of five books in 2015, and had forgotten enough of the actual details of the story, while retaining the gist of it in memory, to be able to thoroughly immerse myself in them. An immersion that coincided with me choosing to do a digital sabbat for 24+ hours a few weekends ago, I read, read and read some more, only alternating between reading on the bed, the sofa or curled in the lap of my big armchair.

milk and honey
And then. The other night just before the end of the month, as I was about to retire for the night, my eyes came across milk and honey, by rupi kaur, a book of poetry and drawings that moved me greatly when I first read it in 2018. Hand reached out to get it, and read I did. Milk and honey is also a book that I imagine myself being able to reread numerous times, each time being moved, touched, grabbed by different poems, pulled in by the sometimes evocative drawings. An easy read, in one way, it’s simultaneously not an easy read, in other ways, as the poems of this book speak to relationships, parenting, sexual relations and subsequent breakups, abuse and low self-esteem. A book that makes me go just one more poem before having to turn off the lights at night.