Halfway through my second time listening to Sam Harris in conversation with Timothy Snyder on The Road to Tyranny, I order his book On Tyranny: Twenty Lessons from the Twentieth Century at my local library, ending up number four in line having reserved it. Happy it won’t be that long before I get my hands on it – at the same time, I wish many more people would be queuing to read it, because I believe this is a book we need to read. All of us.

As I listen to Sam and Timothy talk about lesson number one “Do not obey in advance” I shudder at the risk at hand in many countries right now. The overwhelming sensation I pick up on is an againstness – being against muslims and jews, against women and LGBTQ, being against people of color and migrants, being against vegetarians and vegans, being against… anything really, anything that in any small way differs from oneself. 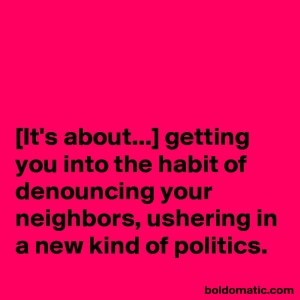 And this scares me. A lot.

On a personal note, I realized years ago, that I am not a con-person, but rather a pro-person. I do not gain energy to create change from being against something, I get energy from being for something. Perhaps because it actually requires more of Me – being For something, I have to look within, finding that which I truly want to see more of in the world – I see many more people around me being against.

In newspapers, radio, TV, on the news (which I am not watching by the way, and haven’t for twenty years now) as well as in my social media feeds. Now – I’ve curated my social media feeds carefully, so I have a lot more friends who are for, rather than against. This is deliberate on my point, as what I focus on is what I’m telling my brain is important, making me get more and more of that which I focus on. So I am carefully tending my “mental diet”, ensuring that what I take in, sustains me in a good way.

But then, when I read editorials in the biggest newspapers of Sweden, normalizing language that a few years back would only be voiced by extremist political parties… I shiver at the danger we are all in. I understand, fully, the importance of making my voice heard in ways possible for me. And more importantly, using my voice, not being against, but being for! In all ways, living that which I want to see more of; Martin Luther King’s vision of a beloved community.

I don’t normally put pressure on you, my dear reader, to actually listen to the podcasts I link to. This time around, I will. Please, listen to Sam Harris and Timothy Snyder. After that, it’s up to you. I know what I will be doing more of, what I will be doing less of, and above all, I’ll be eagerly awaiting a message from the library, telling me to come pick up Timothy Snyder’s book.

Master of Ceremony for TEDxSlottsparken

0 thoughts on “The Road to Tyranny”