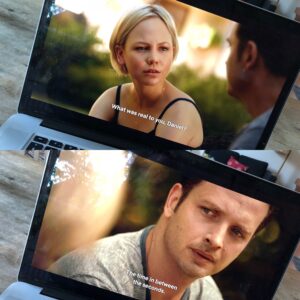 Rectify.
A series I just started watching.
Daniel is asked what was real to him during his years in prison. He replies:

The time in between the seconds.

The in-betweens.
There they are.

Synchronicity in the making.
I’ve had a day filled with in-betweens. At a customer, all day, participating in a quality audit. Responding to questions when needed, keeping notes of what was being done and said. And in-betweens. Loads of them. Just sitting there, waiting (resting in the tranquility of it!) for the inspectors to finish reading, to come with the next question or request.

On the bus home, I watched episode two. And then… towards the end; this. A reminder!
A reminder for me, to make room for the in-betweens. Those moments of doing nothing. Waiting for the tea kettle to boil. For the final spin cycle on the washing machine to come to an end. For the red light to turn to green when out and about on my bike. For the sun to settle.

Not having to fill every moment with action – checking email, social media feeds, messages, or any number of other activities that have come to take the place, the space, of the in-betweens – but rather… simply… being? Breathing? Like balm to the soul.

A gift? Or a present?

0 thoughts on “The time in between the seconds”