The bottom line:
How will and skill combine to emergent creation, and how my awareness of this makes me embody the experience.

”Because the tools of production have entirely democratized, the population of producers is expanding exponentially, and now there’s little stopping those with the will and skill to create from doing just that.”

This is a quote from The Long Tail by Chris Anderson, and as I was writing the accompanying book reflection, I started to dive into the concept of the will and skill to create, as I find it an interesting concept.

Perhaps because this year has been such an opportunity for me to dive deep into the concept of creation, first as a participant in the premiere cohort of the AKIMBO-workshop The Creative’s Workshop, and second because I and many from that cohort have continued to create, and relate, staying in touch both in the forum available for all participants of AKIMBO-workshops, and in a separate forum created as a spin-off from TCW, but also subscribing to each other’s blogs and newsletters, setting up regular or one-off Zoom-calls, and many other ways.

The will and skill to create.
I have it. Have had it for many years.
Most prominently with my writings, I’d say, but there are so many other things I create as well, precisely because I possess the combination of will and skill. Last night I finished an intervention on a knitted sweater I bought in a flee-market years ago, a garment I like, but only wore a few times as the arms are simply off. Way too long, making it all-but-impossible to actually wear. I unraveled the sleeves, picked up the stitches where it was suitably long, and knitted a new cuff. Rinse and repeat, I now have a garment that’s useable again. Will. Skill. Creation. Given the long time it’s been tucked in the projects-basket, will have been a long time coming, even though I’ve been inhabiting the skill to be able to do this, for decades. But all of a sudden, will stepped in, and shit gets done.

That process, where shit actually gets done, is an interesting one. For me.
So when D started to talk about embodiment, something clicked. So I told him, about this intervention of sleeves and he nodded, acknowledging me in my understanding of this as an embodied process or practice. 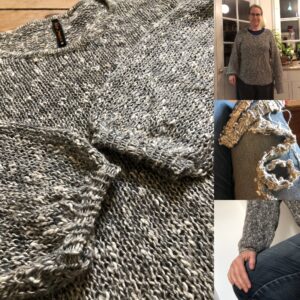 Being a w a r e of what I was doing, a witness to the process, to the sudden consummation of the possible marriage between will and skill, resulting in creativity. Embodying it all, the will, the skill, the awareness. All levels of human beingness playing, together.

The very physical aspect of it, fingers dexterous enough to unravel the machine-knitted sleeves, picking up stitches onto the knitting needle. Binding off and sewing the cuff on the inside, doubling it, to mimic the look of the other cuffs.

The mental and logical aspect of it, my brain working out, as I went along, where to put scissors to sleeve, how to get the arm just right lengthwise, what to knit to bring the girth of the sleeve in by half or so, to ensure the new cuff would actually work as a cuff.

The visual aspect to it, my eyes carefully examining the other edges of the garment, wanting to make it look similar, because I didn’t want the new cuff to stick out, but rather blend in.

The emotional aspect of it, the pleased sensations coursing through me, not just at the finish line when I was done, but throughout the journey. The trepidation at actually cutting into the first sleeve (Will I totally destroy it? Will I succeed in making the necessary changes to it, or will it be ruined forever?), the happiness at being able to catch all the stitches without too much trouble, the sense of exploration and curiosity as I pulled it on now and again, to make sure that I didn’t unravel the sleeve too far, that the newly made cuff was not too long nor too short, but just right.

The meta-aspect of it all, me observing me, putting hand to scissor, scissor to sleeve, knitting needles to yarn, present to my mental calculations and gambles that paid off as I now have a garment that I can use. Want to use.

Who do you want to put more focus on?

1 thought on “The will and skill to create”