Efforting.
The answer to most everything, is what the culture I live in claims. Unfortunately for you, you live in that very same culture. We all do. (Almost. But I would venture a bet that if you read this, you do. In the words of Ishmael, you, and I, belong to the Takers, and efforting is certainly the name of the game in Taker-culture.)

Through the sweat of your brow, you shall eat bread. Genesis 3:19

In Sweden, this is a very commonly referred bible quote, though I suspect many do not know its origins. We mostly don’t quote the latter part (even though that in and of itself points to the agricultural revolution that shifted the multitude of Leaver-cultures into one global Taker-culture), sticking with the first, I ditt anletes svett informing us all that efforting is the way to go, to be, to do. If you don’t sweat, you haven’t done enough, haven’t been good enough, haven’t worked hard enough.

I have written about this before.
But apparently I am not done with this topic yet.

As I woke up, I was reminded of two things that happened the other day.
First off I listened to a (Swedish) podcast featuring Linnea Molander, speaking about happiness and positive psychology. She operates on a basis of happy, and one of her superpowers seems to be the ability to get in flow. Surely she works hard, putting in the effort, but she works with, not against. With, not against, everything. Life. Love. Laughter. Finding that thing that tickles, that resonates, that intrigues, and going with it.

It is the efforting, the straining to make things happen, to go against the flow of the river, working against, not with, that I see her not doing. Not being that. Instead, going with, allowing for things to happen through following the flow of interest and curiosity, using the flowing water off the river to get much further with less energy expenditure. Wise.

The second thing was an email from a former coaching client, connecting me with a friend, thinking we might be a match. Hands reached out, a first conversation scheduled, going with the flow of things, or thinking I have to work really hard to get coach clients. Working with as opposed to working against…

That made me wonder.
What does this all mean?
For me, for my business, for the work I do?

And… Who best know’s the way I coach?
My clients. (Not even me, right!)
So when any client of mine in conversation with others discover a possible match, that recommendation holds clout.

Writing this I remember hearing Seth Godin in response to a listener question (AKIMBO episode Upside down marginal cost, 17 minutes in) with the following:
What makes a show popular on Netflix is not whether or not it’s featured on the homepage. What makes it popular is if someone sees it and tells ten friends. That they have embraced –deeply embraced– the idea of word of mouth, of the water-cooler conversation. […] and that is good news for people who are making great stuff. 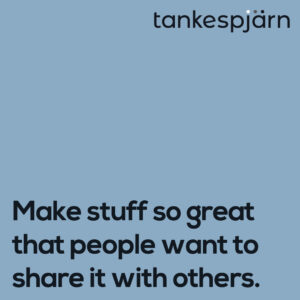 What does word of mouth have to do with efforting though?
Isn’t the only way to do great stuff to work really, really hard?

No.
I don’t believe that (any more, but god knows it’s hard to avoid falling back into it).

Coming full circle here, it makes sense for me, to work with rather than against.
To do the work I cannot not do the best way I possibly can.
To make great stuff, stuff so great that people want to share it with others.

Do I believe this is accomplished through efforting or through finding flow?
I suspect you know my answer as well as I do.
And yet. I need the reminder. Over. And over.
Perhaps, you do too?

Not much good for anything