“One of the questions I’m asked over and over again by fans on the street is “How do you do it?”. In the following pages I will try to shed a little light on how and, more important, why.” 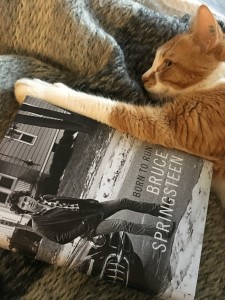 As a sucker for Why, already in the foreword to Born to run, Bruce Springsteen has me on the hook. I read a biography on him a few years ago and loved it. All of a sudden the man behind the artist stepped forward, claiming his place in all of it, and I was impressed. Mightly so, actually. So when I heard he was gonna release his own story, in his own words, I immediately ordered the book from my local library, and now it’w my turn. My turn to delve deep into the life of Bruce, as told by himself. And I look forward to finding out more about his Why. Because in a sense, I think it’s not so hard to figure out the How, is it? You play, play, play, and do all you can to get gigs, be seen, and so on. Busting your balls to get “the break” and when it comes, to be good enough to last longer than the proverbial fifteen minutes of fame allocated us all, according to Andy Warhol.

But the Why? What’s his Why? What’s the driving force behind Bruce, the musician, artist, performer extraordinaire, what are his reasons for doing what he does, and to keep at it, for years on end?

Seth Godin often talks about the pointlessness to How-questions. Asking Stephen King how he writes his books, what pen he uses, what paper, what computer, what hours in the day…. Finding out all those details still won’t take me an inch closer to “becoming the next Stephen King” will it? No. It won’t. One thing, and one thing only will give me even the tiniest of shots at becoming just that: Writing. Sitting down, every day, to write.

And it’s the same with Bruce’s How. It’s not the type of guitar, the program he uses to record sound tracks or the microphone he uses that’s the success factor. It’s that he – consistently and constantly – writes music, and plays it. Sitting down, every day, to write and play music. That’s it. And even though the driving force behind his desire, the urge, the calling, to do just that, might not in any way exist inside me – I know, that when people tell their stories, share their Why’s, something might resonate within me. A twitch, a vibe, something starting to strum, louder and louder, causing me to do what any successful person does, which is: Do my thing, over and over again. When I find something that pulls at me, won’t let go, if I let my energy flow in the direction of where it want’s to go, I will improve over time, I will learn, grow, expand, I will find success. In some way, shape or form.

And that leads me to another thought, about what Success actually means. To me. Not so sure it matters though, for me, or for Bruce? Maybe Bruce wanted to be a world-famous rock star, dreamt of Success, but I venture a guess that is not what drives him, at least not still. That cannot be his fuel today, can it, because he achieved that goal decades ago! There has to be another Why behind it, another reason for him continuing to do what it is he does. Perhaps it’s as simple as having found the thing he cannot NOT do?

#Blogg100 challenge in 2017 – post number 8 of 100.
The book “Born to run” by Bruce Springsteen.
English posts here, Swedish at herothecoach.com.