The bottom line:
Rereads, that I will reread again. And again.
Surprised and thrilled at finding (new) nuggets of gold.

7 books read in February of 2021, three of which were re-reads, Ishmael by Daniel Quinn being the first. I remember the feeling I had when I first read that book, sometime mid-nineties, and knew the special features of the main character, but couldn’t for the life of me pinpoint what it was about and/or what the thing with it was. Just that there was a thing with it.

Rereading it, I quickly remembered the thing and realized that this book has been working undercover within me and my subconscious ever since the first time I read it. It also gave me the peculiar feeling of kind-of explaining my beloved D, co-Buddha and close, close friend, the one who, in many ways, know me better than anyone else. On page after page, it was as if I got D, upon reading. Not that D is who he is because of Quinn’s books, D has been D since birth (always and already), but rather that I was given a framework within which D… makes sense?

Oh. That sounds horrible.
I don’t mean it to read horrible, quite the opposite. Perhaps the closest thing to describe it, is that reading the Quinn-books was akin to the experience I had when D opened the universe to Jeanette Winterson’s Written on the body, in a bookclub-session a few years back.

Once you learn to discern the voice of Mother Culture humming in the background, telling her story over and over again to the people of your culture, you’ll never stop being conscious of it. Wherever you go for the rest of your life, you’ll be tempted to say to the people around you, ’How can you listen to this stuff and not recognize it for what it is?’. And if you do this, people will look at you oddly and wonder what the devil you’re talking about. – Ishmael, by Daniel Quinn

(My marginalia exclaims ”This is D!”)

The second book I reread, The Story of B, is the sequel to Ishmael, also written (yeah… obviously) by Daniel Quinn. Reading these two gave me   s o   m a n y   i n s i g h t s   and I brought them up in each and every conversation I had during and after reading them, for the better part of a month. I even started to write something about it, in relation to the concept of abundance, and then… lost the plot somehow, because there’s so much I wanna say about this, and I haven’t –yet– been able to figure out how to say it succinctly. But it’s definitely worth a continued noodling, so I promise, I will!

The subtitle to The Story of B reads An Adventure of the Mind and Spirit, and surely that is what it is. Both these books are actually adventures of mind and spirit, both are very special, and Ishmael is, in a sense, the ”better written book” of the two, even though I have to say that hidden in the somewhat cheesy story of The Story of B, the message of both books is made much more clear and succinct in the latter one. 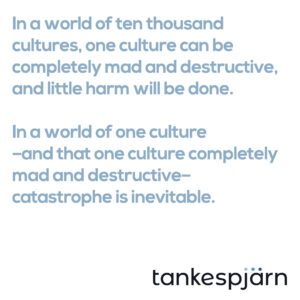 We are in the process of making the world unlivable for ourselves –precisely because everyone is being forced to live a single way.

The third reread of February was just that, the third time I reread it. Letters to a Young Poet by Rainer Maria Rilke. And what a lovely book it is. I so love it. The first time I read it, in 2016, I’d heard so much about it from Krista Tippett, host of On Being, my favorite podcast, that I had imagined something quite differently, but was most happily surprised upon reading it. Loved it, filling the pages with marginalia. My second reread, took place in the summer of 2020, during my doing-nothing-much-except-reading-weeks of vacation and recuperating after being quite singed at the edges during the first half of that year. More marginalia, more discovery, more love.

So when the book was brought up in my Creative Community, the suggestion to have it as a bookclub-choice was readily applauded by me! By now, third time around, most of the marginalia was already in place, some getting a double highlight.

14 blog posts I’ve written so far, inspired by Letters to a Young Poet. Fourteen. I could write fourteen more. Easily.
One of those might be on the importance of the translator, because this is something that came up (again) during our conversation on the book, as we had at least three or four different translations among us, making it blatantly apparent that translations truly matter. A lot. (My copy translated, with an introduction and commentary, by Reginald Snell, first published in 1945.)

[…] and never to succumb to the temptation to write pretty-sounding English just because it is a poet that speaks. Rilke is a master of the unlikely, but poetically true, word; and a cunning employer of alliteration, personification, and hypallage. – Reginald Snell, in Translator’s preface to Letters to a Young Poet

If you’ve yet to read it. Just do.
The generosity of Rilke, in writing these very thoughtful and humble letters to the young aspiring poet, is remarkable, making me long for the day when I choose to read more of him. Which I will.

Be a purpose finder.

rebel against a thwarted view on wanting