The day opened up thanks to a change of plans, and although it’s Saturday, I thought I might get a few hours of work done, after first spending two hours over Zoom with my two Buddhas. So I sat down, computer at hand, and decided to do my work first, rather than prioritizing the paid work I have to get done.

(Yeah.
Sigh.
I know.
Crazy, right?!
I had perhaps get a wee bit better at prioritizing…)

But before that, I did a combo breakfast/lunch. And yes. I am aware. This might be called a brunch. However, brunch sounds like a lovely spread, something to nibble at, come back to more than once, preferably in the company of great friends, and I had none of that. So brunch doesn’t seem like the word, if you know what I mean? A bowl of yogurt with a diced banana and an apple, alone, watching an episode of The Crown, simply isn’t brunch, no matter what time of day it’s done.

Never mind that though. 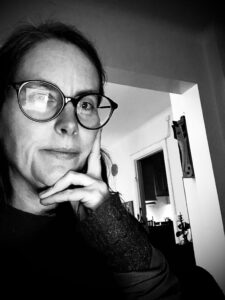 My work today constituted writing a response to one of the lessons in the Story Skills Workshop I am currently participating in, a lesson I’d let percolate for not just one, but definitely two, three? Or perhaps even four days?

(My game-plan in a workshop like this is not to read ahead of where I am currently at. So as I did lesson D today, not until having published my response did I start to read other’s responses to lesson D. I can read material that I’ve already moved past, but not material I’ve yet to provide my own take on. I want to come at each lesson from myself, from my thoughts, ideas, without having been –too– influenced by how others respond to them.)

I like percolating on these prompts, letting my response come, an organic growth from within somehow, but hey, there’s another three lessons that have already been released, and more coming, so a nagging sense of wanting to get it down on paper, so I could move on to the next lesson, giving that one room to percolate as well.

And yes. I did get my work done.
It’s just that besides writing my response to the questions asked, I’ve also responded/interacted/been moved by at least a dozen other responses. Wanting to read, savor, respond, and not just in this forum, but also in the other two forums I am a proud participant/member of. What I haven’t done, is that paid work. And as it’s now five-thirty in the evening, I feel about ready to call it a day.

Given that it’s Saturday, perhaps that’s not a bad choice after all?

Out for a walk

1 thought on “Getting a few hours of work in”