Caspian talks in his #teachingoftheday on “just doing things” and not falling prey to the trap of perfection and endless planning. Those two aspects (perfection and excessive planning) likely make a lot less happen in the world than what would otherwise be the case.

When asked What could you accomplish without perfection? my reply was: My #teachingoftheday:s for instance – and my FB live:s – just doing it, and not really worrying about it. 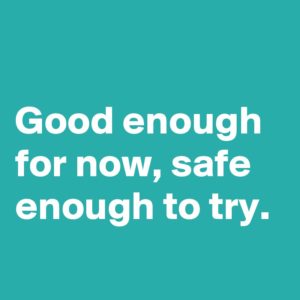 And as I was typing my response, Caspian said just as much, because for him as well, the #teachingoftheday-vlogs are good enough to ship in the moment, and definitely safe enough to try, with no real harm imaginable for Caspian. Or for me. Because I feel the same.

Having blogged for six years and in that sense getting used to “shipping content” on an almost daily basis, has definitely prepared me for the vlog-experience. And it’s been fun. Once I had filmed my first #teachingoftheday, I immediately filmed another one, and I’ve done a couple more since. And then I started doing FB-live:s, and truly enjoyed myself. With no aim for perfection what so ever!

What might you be able to do (for yourself, for your close ones, for the world, the scope doesn’t really matter) that would be good enough for now, safe enough to try?

The gift of coaching