Am procrastinating. Again. And it bugs me.

So not only am I not doing that which I want to want to do (apparently I don’t, or else I would be doing it, right?), but I am also bugged at this fact, wasting an extra amount of energy on being irritated at that which I am not doing.

Geez.
What the f*ck is wrong with me?

Just do it.
Stop thinking about this or that.
Stop doing other sh*t, instead of that which I know in the long run definitely holds the most intrinsic value for me (and others!). 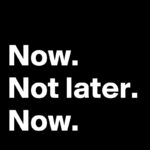 Or rather.
Just start.
Just do.

(Ok. I read you. Signing off, to take action. On that which I want to do. Because I do! It’s just an excuse, just a ruse, me trying to play it small, avoiding going out on a limb simply because I do not know what it will become. I cannot know. No-one can. And that, in and of itself, is all the more reason to do it. Now. Bye!)

Shut up and work!