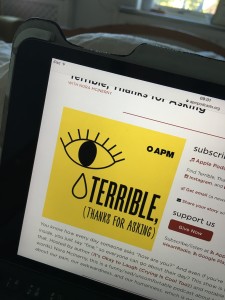 I found a new podcast to listen to, thanks to the New York Times podcast club on Facebook. It’s called Terrible, thanks for asking, and on the surface it might seem to be a “true life drama junkie”-podcast. This is how it’s described:
You know how every day someone asks “how are you?”. And even if you’re totally dying inside, youn just say “fine”, so everyone can go about their day? This show is the opposite of that. Hosted by author and notable widow (her words) Nora McInerny, this is a funny/sad/uncomfortable podcast about talking honestly about our pain, our awkwardness, and our humanness, which is not an actual word.

As I don’t peg myself a “true life drama junkie”, or a drama junkie at all for that matter, this podcast isn’t that at all, in my experience. It’s not a “revel in our horrible stories and sympathise like crazy with the storytellers while being happy as hell it’s not my own life”-podcast. Rather it’s a podcast where I can empathize with people having (had) various experiences that affected them and their lives.

Having only listened to a handful of episodes so far, the fifth one titled Help me remember is the episode that’s affected me the most so far. Grace, the daughter of Dawn Pereda whom the show is about, is wise beyond her years, and it hurts to hear her wisdom spoken out loud like this. It hurts, because she’s twelve, and she’s already experienced enough trauma, heartache and concern to last a lifetime. And yet, she continues on with her life, with grace, enormous grace.

I cannot help but think:
Here’s a young child who’s learned the hard way that the stories she tells herself shape her reality, making her deliberately very careful to create the best reality she can, given her circumstances.

We need each other

Will you tell me?