”Holding his breath, swaying drunkenly beneath a bulb which illumined little more than grime and moisture, Moon stared awhile at the cement wall; it took just such a hopeless international latrine in the early hours of a morning, when a man was weak in the knees, short in the breath, numb in the forehead and rotten in the gut, to make him wonder where he was, how he got there, where he was going; he realized he did not know and never would. He had confronted his same latrine on every continent and not once had it come up with an answer; or rather, it always came up with the same answer, a such and gurgle of unspeakable vileness, a sort of self-satisfied low chuckling: Go to it, man, you’re pissing your life away.” 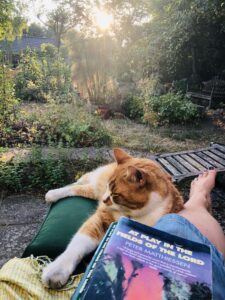 I bought At Play in the Fields of the Lord by Peter Matthiessen in the mid-nineties, in Bangkok, Thailand, in an Asia Books bookstore. My brother lived in Thailand the last decade of the last century, and books were but one of the things I had a habit of bringing home with me (much rather books than the amoeba I took home a few years later). This book has managed not to get culled in my now-and-then book-culling events, but coming up on 2020 I decided its time was now. Either I read it, or I let the book go. I chose to read it.

”[…]; when his hands were in use, his whole face eased and softened, and a tentative humor would replace his tiresome sense of moral right. With the vanity evaporated, with sweat on his dirty face and his hip-pocket comb forgotten, the face took on a true handsomeness of strength.”

Throughout high school I had a romantic notion of becoming an ethnopharmacologist like Paul Cox, active in the Samoan Islands. I have an inkling that this book spoke to that part of me, even though it’s not about ethnopharmacology per se. Rather, it’s about man. And nature. And what happens when cultures clash, in more ways than one.

”How easily, in the absence of children, the whole experience of life became abstracted, a pattern of words and daydreams. Because the life in Billy was so fresh and immediate, he had served as a reminder of reality.”

Now and again, I read a book, that I don’t know how to rate in Goodreads, upon pressing the I have finished this book”-button, moving it from Currently Reading to Have Read. This is such a book.
Did I like it? No. Not really.
Did I enjoy reading it? Not particularly.
So it warrants a really low rating? Well. No. It doesn’t. Just because it’s not an easy read, and it’s somewhat confusing, incomprehensible at times, it’s not a book that deserves anything less than three stars (on a scale of 1-5, with 5 being the highest rating). Possibly four. Maybe even five, because I honor the complexity of it, the experience, or research that must have gone into the preparations.

There are sentences, passages, that I find extremely beautiful.
Some that are so descriptive, I can feel the green rotting smell of the jungle while reading.
Others that speaks of truth (perhaps even Truth?).

”Our Christian–that is, Western–outlook is rather lugubrious, do you not think? We have persuaded ourselves that abnegation”–and he touched his cassock, not without irony–”and self-sacrifice are superior to joyous self-expression, to the emotions simple being? Now… if we could just take time from our teaching of our poor Indians, we might learn something from them. After all, the Indians come out of Asia, theirs is essentially an Eastern culture; they do not seek for meaning: they are. They are not heavy the way we are, they are light as the air; their being is a mere particle of the universe, like a leaf or wing of dragonfly or wisp of cloud. Unlike ourselves, they are eternal.”

Perhaps it’s one of those books that I am happy to have read, rather than having been happy while reading?

The book I am blogging about is part of the book-reading challenge I’ve set for myself during 2020, to read and blog (more or less) monthly about 12 Swedish and 12 English books, books that I already own.

Listen for the unknown #6