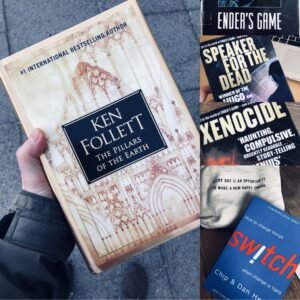 Five out of eight books read by me in April of 2021 were rereads, spanning a wide stretch of time and space.

Switch by Chip and Dan Heath, a book on change I must have read hot off the presses in 2010. I remember bringing the concept of bright spots into the India-project I was working on back then. Rereading it, I was somewhat amazed at how a fair number of the points the Heath-brothers make in this book have stayed with me ever since, I’ve effectively internalized a lot of it. Or perhaps, as an agent of change at heart since long before reading Switch, they simply put into words what I knew but hadn’t turned into clear and concise language. Luckily, they did!

”When you improve a little each day, eventually big things occurs… Don’t look for the quick, big improvement. Seek the small improvements one day at a time. That’s the only way it happens–and when it happens, it lasts.” – John Wooden, UCLA college basketball coach, quoted in Switch

The Pillars of the Earth by Ken Follett, the first in his Kingsbridge series, a book I also must have read upon its release in the beginning of the nineties. A sucker for historic fiction, a lover of books that we in Sweden dub tegelstensroman, meaning a thick-as-a-brick-novel. At 976 pages, this book certainly qualifies.

The remaining three rereads belong together in Orson Scott Card’s saga starting with Ender’s Game, followed by Speaker for the dead, and finally Xenocide. I read these books some twenty/thirty-odd years ago, loving every minute of it. Thinking back to books I loved back when, the Ender Saga definitely popped into my mind, and I kinda remembered Ender, kid-wiz, space, computer… but not much more. Details gone from my memory,  the felt experience remained.

In the preface to Ender’s Game, Orson Scott Card writes something that speaks to precisely that:

”The “true story” is not the one that exists in my mind; it is certainly not the written words on the bound paper that you hold in your hands. The story in my mind is nothing but a hope; the text of the story is the tool I created in order to try to make that hope a reality. The story itself, the true story, is the one that the audience members create in their minds, guided and shaped by my text, but then transformed, elucidated, expanded, edited, and clarifies by their own experience, their own desires, their own hopes and fears.”

Ever since I attended the AKIMBO Story Skills Workshop I’ve been even more fascinated by the concept of story than before. Having revised the story of my life quite severely ever since I became a mother in 1999, I know first hand how impactful they are, the stories we tell ourselves. The stories others tell have impact too.

”[Humans] question all our beliefs, except for the ones that we really believe, and those we never think to question.”
– Excerpt from Speaker for the dead

The connection between the story I tell myself and the deeply rooted beliefs I hold–beliefs about myself as well as the world–is strong. I am not sure the two are distinguishable from one another. What is a story if not beliefs? What are beliefs if not a story told? And what do they give rise to? All the good, all the evil.

”Any animal is willing to kill the Other, said Ender. But the higher beings include more and more living things within their self-story, until at last there is no Other.”
– Excerpt from Xenocide

Buddhas by the roadside