Diving into the difference between the law of tribal and modern societies, in conversation with Beverly Delidow, the main difference lies in the former aiming for redemption and the latter at retribution. There’s a lot to be said for that, which we do in the episode, but quite naturally, I bring up the concept of forgiveness, remembering an amazing Moth-story by Hector Black, that I blogged about in April of 2014. Hectors tells a horrible story of his daughter (in love, if not by birth), and shows an absolutely astonishing ability to forgive.

However, a few days after this conversation, I finished reading Caste by Isabel Wilkerson, which threw me a tankespjärn-curve ball when reading in chapter The Stockholm Syndrome and the Survival of the Subordinate Caste, referring to the Charleston church shooting, she writes:

”Black forgiveness of dominant-caste sin has become a spiritual form of having to be twice as good, in trauma, as in other aspects of life, to be seen as half as worthy.”

She continues, quoting Roxane Gay, speaking out after the massacre:

“White people embrace narratives about forgiveness, so they can pretend the world is a fairer place than it actually is and that racism is merely a vestige of a painful past instead of this indelible part of our present.”

Hector Black is (was, he died at 95 in 2020) not black.
But still, it makes me wonder… Hector showed an almost superhuman feat of forgiving the man murdering his daughter. What makes a person capable of such a feat? And what is the influence of culture and context here, Black being a Quaker and on the front lines of the civil rights movement in the US in the 60s?

And as a pendant to this, a police officer shot to death in Gothenburg, Sweden gives rise to calls for law and order. Or, rather, ever more law and order, because what’s there isn’t enough. And I have to question, once again, if retribution is truly the way to go?

The Prison Compassion Project show me something else, as inmates are asked to take a step into the circle every time statements read out loud by Fritzi Horstman matches their childhood experiences.

Retribution? Or redemption?
What is it we need more of?
And how are answers to these questions influenced by the impact of culture and context? 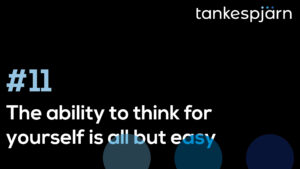 Inspired by more than one meander from episode 11 The ability to think for yourself is all but easy of Tankespjärn with Helena Roth, a podcast of meandering conversations, this time with Beverly Delidow. You can find the podcast wherever you listen to podcasts, in both audio (Spotify, Apple, Google and the likes) and video (on YouTube).