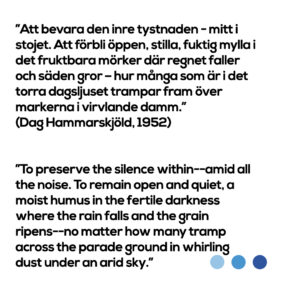 ”To preserve the silence within–amid all the noise. To remain open and quiet, a moist humus in the fertile darkness where the rain falls and the grain ripens–no matter how many tramp across the parade ground in whirling dust under an arid sky.”

March was a month of 11 books read, but alas, but one of those was a reread, and in Swedish at that. Vägmärken by Dag Hammarskjöld, in English entitled Markings. On the hunt for English translations of my dog-eared nuggets of gold from Vägmärken, those I find particularly significant –for their beauty, sadness, poetic aesthetics or simply their poignancy– I find plenty of other translated bits and pieces, birthing in me a desire to read the English translation (by W.H. Auden, seemingly, possibly there’s been more than one translator? Wikipedia holds the key: translated by Leif Sjöberg and refined by W.H. Auden in 1964, which seemingly is the only translation) too.

Published posthumously after Hammarskjölds death in 1961, the Swedish sometimes seems old, has-been. Not surprisingly, given the decades that have passed since it was written, but I find, as I skim over some of the English translations, that I find in them what I found not in the original text. This is one of the wonders of translations, as if being able to enter a house through two different doors, able as I am to read both the original text as well as the translation. 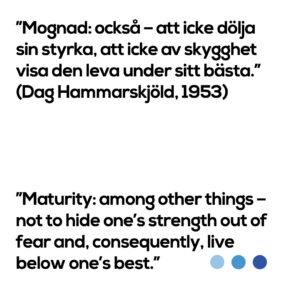 ”Maturity: among other things – not to hide one’s strength out of fear and, consequently, live below one’s best.”

Nowadays I aim to do gentle towards myself.
Much can be said about Dag Hammarskjöld, but gentle towards himself would not be among them. Quite the opposite.  Perhaps that is why reading Vägmärken bring up so many mixed feelings in me? Recognition, as well as relief, that I no longer suffer such a harsh inner dialogue, filled with doubt and self-contempt.

And it must be said, this book is not an easy read. But a fascinating one.  I don’t know if the English translation stick to one of the oddities of the book, whereby Hammarskjöld often quote others, in English, German, French and even a dash of Norwegian. As I read I flick between the text and the Notes at the back of the book over and over again, to make sure I grasp what is there, to the best of my understanding.

The following quote I’ve blogged about (in Swedish) no less than six times, starting in 2013 when I first heard the phrase vårt väsens skål, i.e. the chalice of out being. I find that so utterly beautiful, and can honestly say that I would never have read Vägmärken had I not heard this phrase, because I simply would not have found the book without it. 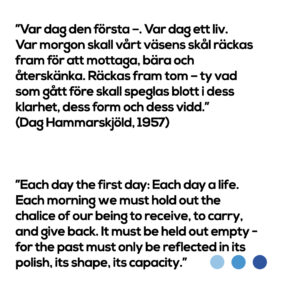 ”Each day the first day: Each day a life.
Each morning we must hold out the chalice of our being to receive, to carry, and give back. It must be held out empty – for the past must only be reflected in its polish, its shape, its capacity.”

What does it take, for you, from you, by you, to hold out the chalice of your being, each and every morning, to receive, to carry, and give back?

This is how it is for everyone.