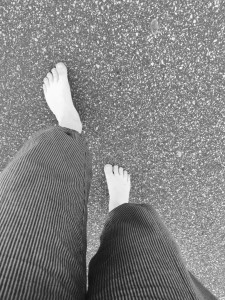 For me, doing most of my coaching as CoachWalks, walking outdoors with my clients, a podcast entitled Walking to listen is impossible to resist. So I press Play, and am amazed that I have not come across Andrew Forsthoefel before. Because what he speaks about – and writes about in the book with the same name – is absolute beauty.

Here’s a young man who speaks of himself as always having had the “seeds of curiosity” within him. And the way he speaks of himself, and his journey, and how he uses his curiosity to actually see – truly see! – people, has me wowed. The attention he grants people, known or unknown to him, being curious, seeing the individual, listening. Without the specifically voiced intent to gain something, but rather, wanting to give. And in giving attention, exquisite attention he calls it, of course, he is gifted something extraordinary:

Seeing them as worthy of time and attention. Worthy of their place in the world. Seeing them as if they belong, seeing them as if they might have something to offer. And asking people questions in that way, allowed them to sing songs they never even realized they had in them. And so in seeing people this way, it often had the effect of inviting them to see me that way. And when we were seeing – when there was that mutual sort of osmotic flow of respect, even reverence, you know, love is a word that can be used to describe this kind of space.

This is a podcast I’ve listened to two, three times already, with more re-listens sure to come, I am most definitely curious enough to grab a copy of his book. Watering the seeds of curiosity inherent in me, is something I’ve consciously been doing for years now, after having them be totally dormant for decades. And you know what? In the shift, from dormant to fully blossoming curiosity, I experience my life being Lived; Richer. Fuller.

I love these poems.