The bottom line: A year, like and unlike any other year, in that way that years are. With recurring features brought on by seasons and personal reasons, interspersed with unique elements, never to return. Except in memory. This is a reflection on 2021, which cannot, in any way, encompass the totality of what the year has comprised, and yet, hopefully gives you a taste of it.

As so many years before, the time has come to summarise the calendar year of two thousand and twenty one. 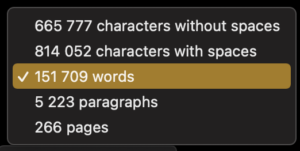 A year of going deep within, continuing on the journey that I call my deep dive into shame, started in 2020. I write about my deep dive in The Depth(s), a document that right now stands at 151 709 words. That’s a lot of words. One time, some time, part of this might turn into a book. But for now it’s too personal, too private, too raw, but most of all, too much part of an ongoing process within me, for me to share it, widely. I share with D, who’s accompanying me on this deep dive through process-oriented therapy, a type of therapy (and a therapist) I cannot recommend enough. And I share some of it with my Creative Community, which, it just so happens, has also been a large part of my 2021. We’ve released an online gallery Regeneration 2021 featuring three shows, Gather, Brew and Feast. It is something else to be a part of this enormously creative community, so it’s definitely aptly named. 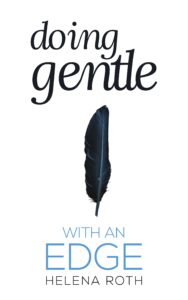 Looking at the little list of words I wrote down a few days ago, when I started to think about this year’s review, creativity place a large part. I released an ebook, Doing Gentle with an Edge, (also available on Amazon) that a few months later also turned into an audiobook, read by none other than yours truly.

And besides writing 150 000+ words in The Depth(s) at long last I finally got my act together to go on a writing retreat in the beginning of December. During three days I dove deep into what goes by the name of The Book on Fear at the moment, the foundation of which is 50-ish blog posts I’ve written on/around/concerning fear. Unlike Doing Gentle with an Edge, which more or less is a compilation of blog posts in a series on Doing Gentle published in 2016, The Book on Fear requires more tweaking. So I will be taking a couple of more writing retreats in the deep forests of Småland to make sure this book is released in 2022.

Nudged by Caspian, I also started a podcast series over on Tankespjärn with Helena Roth (available wherever you listen to podcasts), already on season two. Me, in meandering conversation with five different people, five times each. Season one featured Beverly, Frank, Mayke, Alison and Gary, and oh, the conversations! Giving rise to such connection, curiosity, clarity and confusion both. Amazing! Twenty-five episodes later, we gathered together all of us (except we codlin’t find a date suiting us all so in a 3 + 2-set up) and shared our reflection on being a part of this experiment, validating my sense of being heard and seen, an experience shared by us all.

Season two features Matthew and Inma (in a three-part conversation), Reddy, Andy, Izzy and Steve, and it’s as rich as season one. (I even have my first conversation-partner for season three ready, though that won’t start until Q2 of 2023.) And then, of course, there’s been Buddhas by the roadside-conversations as well, with my beloved Buddha-compadres Caspian and Dominic.

I was honoured to be asked to give an inspirational “TED Talk-ish” talk at Polynomdagen, where I provided some tankespjärn in the form of a question: What can you remove from your life to make it richer?

Not taking my own advice, one of the things I added to my life, making it richer, was to reactivate my Twitter-presence. Perhaps a bit weird that more Social Media (or SoMe, which is my preferred acronym, definitely pointing to what it’s all about most often) could enrich my life, but I promise, it has, perhaps especially so since I’ve learned and implemented a lot from my last stint in twitterland (2012-2016). Kjell Vandevyvere for instance, a man whom I challenged by providing some tankespjärn to a tweet of his. That turned into a conversation which led to him writing a piece about me that blew my mind. He got me so well, this almost reads as a combination of CV and personal letter.

A different kind of visible takes place during ninety minutes every month, in the Tankespjärn community monthly meet up’s on Zoom. Most often with a set topic, but now and again without a specific topic, inviting in what want’s to happen. This is another place for seeing and being seen, for speaking and being heard. There’s deep listening going on here, and it’s a treat every time! The December call was a no-given-topic-call that turned into a conversation around intentions, as the doodle reveals. (If this intrigues you, join us won’t you!)

I had Covid.
I came down with it in May, and had a fairly good run of it, coming out the other side of it after two three weeks in total, without any lingering effects. But it was an interesting experience, especially since I did have a bit of a media-induced scare, where me suddenly spiking a fever and getting a somewhat compromised and laboured breathing had me fear for my life.

I played around with 16:8 fasting in the beginning of summer, and then found Data-Driven Fasting in the fall, which, honestly, isn’t so much about fasting as it is about learning what works for me, both when it comes to what to eat, but more importantly, when to eat. Learning what foods satiates me, and what it feels like when I am actually hungry, has been quite revelatory, and I look forward to learning more. About me. Diving deep here too!

It’s not been a very good year for music, what with both Lindy hop-lessons and choir practice quite severely affected by Covid, but I’ve done a lot of Spotify-listening, and attended both guitar- and lindy hop lessons as well as choir practice, though not as much as in pre-Covid times. Luckily, Lindy hop-classes did commence again in the fall, and oh how I love it! There’s something about me and dancing and I have a feeling my Year of Bubbles will invite more dancing in my life in the year to come.

My choir sang on All Saint’s Day, and also on Boxing Day, when we performed in Södra Sallerup’s Church. Even though we were 50% fewer than what we normally are, it sounds quite lovely:

I would be amiss if I did not mention books. 108 books read (and listened to) in 2021, I thank god for Goodreads, without which I’d have a much harder time keeping track of both the ones I’m reading, as those I want to read. I’ve continued my Monday afternoon Reading Retreat with friends from my Creative Community, where we also do irregular bookclub-meet up’s that are such a highlight. The conversations we engage in are just wow!

It’s also been a year of deliberately and intentionally rereading books, some even more than once (which makes it twice…). Greenlights by Matthew McConaughey for instance, The Alchemist by Paulo Coelho, two books I’ve re-listened to several times this year. And yes, me actually listening to audiobooks is a new feature, one I’ve basically not ever done before. I have simply not enjoyed it. I am warming to the concept, even though the physical book will always (!) be closest to my heart, never to be trumped by listening to an audiobook, that’s for sure. But the latter can be a nice complement.

Daniel Quinn is the author responsible for the most re-reads of the year though, as I’ve been reading and rereading his trio of Ishmael, The Story of B and (my favourite) My Ishmael over and over. Each time, I discover something new and mindboggling. A couple of other books by him (If they give you lined paper write sideways and Tales of Adam) have also graced my reading-list, and without a doubt, spreading the word about these books has been a large part of my twitter-presence, leading to some quite impressive results, as the tweet from Zoe Scaman reveals. Daniel Quinn sure knew how to give tankespjärn!

Women who run with the wolves by Clarissa Pinkola Estés, the book that shook my world last year, has been a part of this year for me too, as me and a friend have been having monthly book circles (mostly over Zoom) talking it through, one chapter at a time. Approaching chapter thirteen, we have a few more months to go before we’ve finished it all, but once we have, I intend to find others for another round of a-chapter-at-a-time book circle of the very same book, so if that intrigues you, let me know! I would love to continue diving deep into this book and myself, doing so in the company of other open and curious people.

In September my eldest left the nest, moving in with a friend in an apartment a couple of kilometres away. It all went down quite quickly, but… it feels great. Ready to fly since a couple of years back, something both of us have been very aware of, it simply felt like the natural step to take. As a parent, this is what it’s all about, isn’t it? Parenting is about getting your chicks ready to fly, and whether or not they fly the coop on their own accord or if they need a kick in the butt to do so, the pleasure of watching their first true solo-flight is quite something! 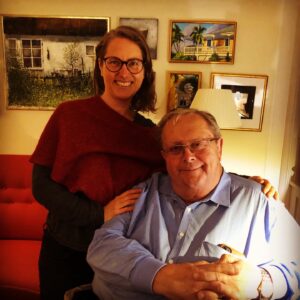 Spending a week in Vejbystrand with my mother this summer, thousand-fold more time together than in the preceding year-and-a-half was important, and she never ceased to amaze me, my mom. I also went to Stockholm in the fall, where I got to spend an afternoon and evening with my dad and his wife, neither of whom I’d seen for the better part of 2+ years. That was really lovely as well. 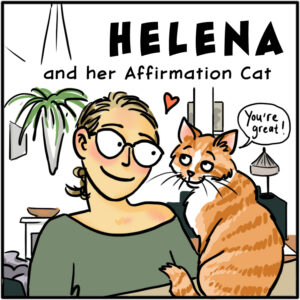 And then there’s Pop the cat. My Affirmation Cat, something my dear friend Marijke immortalised in this lovely portrait of the two of us. What would life be like without him? When my youngest comes here for his two-week stint (after spending two weeks at his dad’s place), Pop the cat is the first thing he asks for. Me, not so interesting, Pop the cat, where is he? And once he spots him, there cuddles galore, cat hair flying!

As much as I’ve been enjoying the slower pace of life that Covid kind of enforced on most if not all of us, not spending time with family and friends in 3D has brought me to a place where I need more hugs. Physical, actually hugs. That’s what I long for, so let’s aim and hope for more hugs in 2022.

Being one with all

Being gentle to me – Reflection June ’17

Ebook in the making