I caught Covid (or, Covid caught me?) in the beginning of May 2021, and as I gauge the severity of my bout with this particular virus, as well as any pother virus or ailment I’ve been laden with by whether or not I can still read books, Covid actually didn’t hit me that hard. In May I read a total of fourteen books, eight of which I gobbled down during the ten days I spent cooped up in bed. So I wasn’t too severely hit, as you can tell.

Two of the fourteen were re-reads. My second reread this year of Ishmael by Daniel Quinn, as well as Ken Follett’s World without end, the second book in the Kingsbridge/Cathedral series. This latter one as enjoyable as The Pillars of the Earth. A brick of a book, rich, historically enticing story with great characters that draws me in.

But Ishmael.
It’s a book that’s not just drawn me in.
My first reread this year reminded me how it rather found a place inside me, when I first read it in the mid-nineties.

The reason I reread Ishmael a second time this year was for the Creative Community bookclub, and oh. my. what. a. conversation. we. had! True to my habit, I doodled during the conversation: 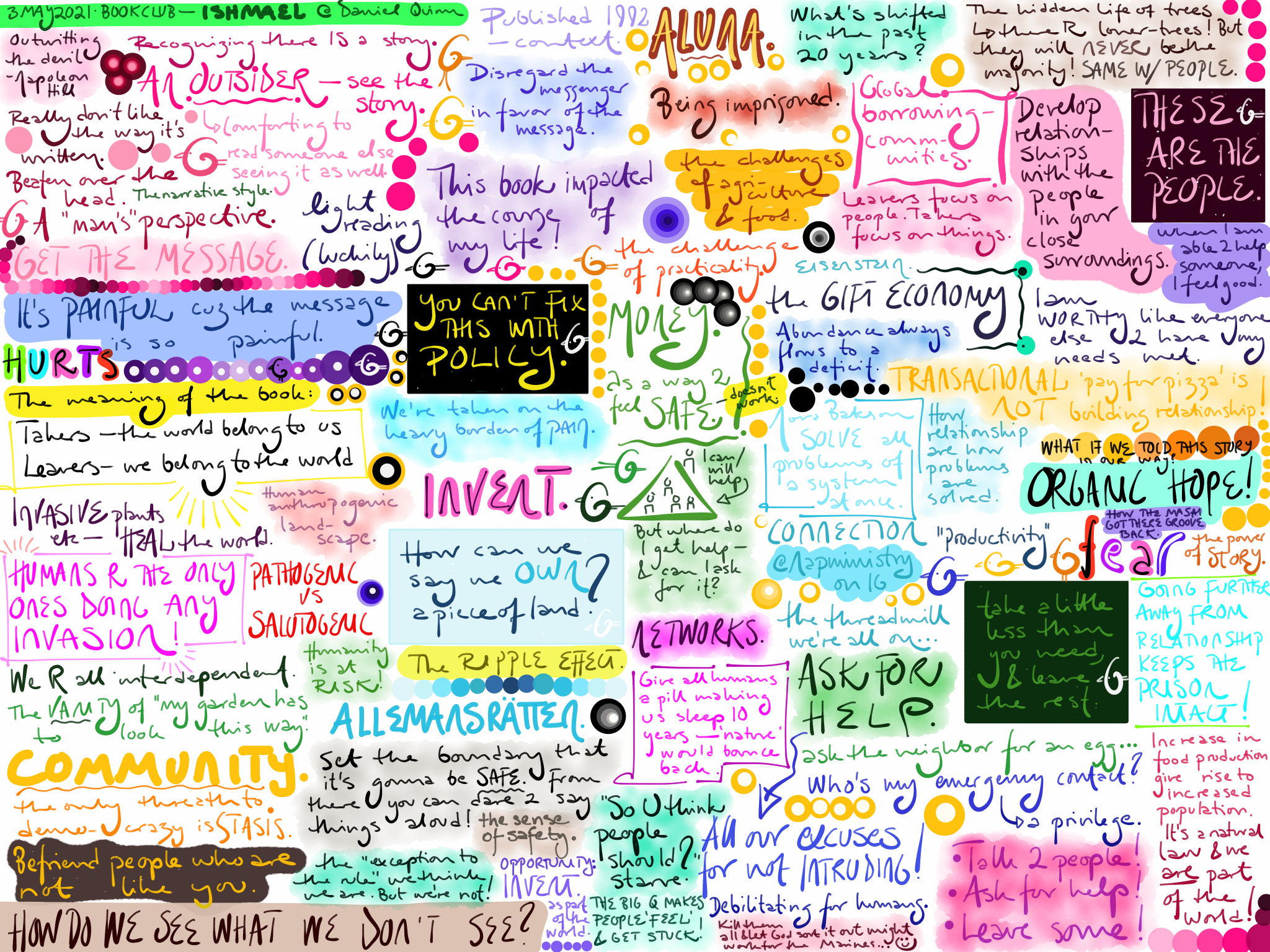 As you can see, we went right and left, up and down, inside and out. Not leaving many stones unturned.

I was helped during the conversation to see something I don’t particularly like about the book and the way it’s written, one I’d only experienced as a minor chafe before. The character Ishmael is a bit sarcastic and condescending, ironically taking on the tone of white privileged middle-aged male, and once my eyes opened up to this for real, I can. so. see. it. It’s unnecessary, but not enough to make me not recommend the book to everyone. Because I do. (Even though I usually suggest people read the entire trilogy, as they complement each other very well. A lot of the questions I had bouncing inside my head reading Ishmael are answered or at least clarified in the two follow-up books of The Story of B –which is the cheesiest of the three– and My Ishmael –which is my favorite.)

For me, there’s a lot of tankespjärn in this (these) book(s) by Daniel Quinn, and one of the most contentious areas concern food production, distribution and the concept of famine.

Famine isn’t unique to humans. All species are subject to it everywhere in the world. When the population of any species outstrips its food resources, that population declines until it’s once again in balance with its resources. Mother Culture says that humans should be exempt from that process, so when she finds a population that has outstripped its resources, she rushes in food from the outside, thus making it a certainty that there will be even more of them to starve in the next generation. Because the population is never allowed to decline to the point at which it can be supported by its own resources, famine becomes a chronic feature of their lives.

It’s painful to read this.
It makes me ashamed as I live in an area of the world where there is ”too much”, and the amount of food wasted on a daily basis would be sufficient to feed everyone on the planet. Yet… we don’t. And also… if we (and who’s we?) did, what then?

How can we stop the population explosion that is so far beyond reasonable… humankind has turned into a huge problem, because there are too many of us.
It. Is. Not. Sustainable. (And thus nowhere close to regenerative.)
Period.

It’s mind-boggling, hurts and is outright painful to read.
It doesn’t get better, as Daniel Quinn adds another tankespjärn to my mind-f*ck:

–If there are forty thousand people in an area that can only support thirty thousand, it’s no kindness to bring in food from the outside to maintain them at forty thousand. That just guarantees that the famine will continue.

–True. But all the same, it’s hard just to sit by and let them starve.

That last sentence.
Proof. For me, as I immediately fall into the we, or I, cannot let others starve, and die as a result of it-mindset.
Is there anyone reading this that doesn’t?

(My head fall despondently into my hand, I close my eyes and sigh.
I don’t want this to be true. But I think it is.
It is for all other creatures on life.
When there are plenty of rabbits, there will be more foxes around. Over time, the foxes will eat enough rabbits to decimate their numbers, and as a result, the number of foxes will diminish too. And on and on it goes.

How could we, humans, tell ourselves a story serving as the basis of our culture, that we are not subject to this very basic law of nature?)